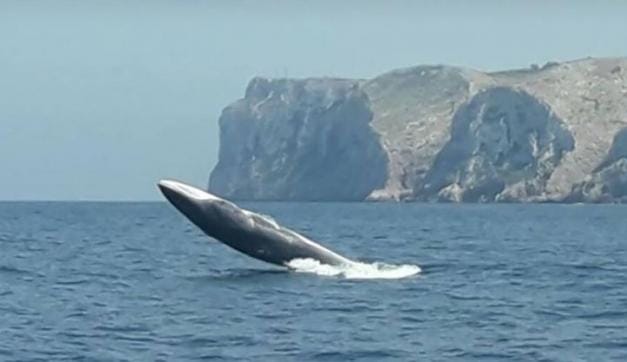 If you're passionate about nature and love watching animals roaming free, the Region of Valencia gives you the chance to watch dolphins and whales in their wildest state.

The Region of Valencia has a number of strategic locations where you can watch dolphins and whales responsibly. The headland of Cabo de San Antonio in the province of Alicante is famous for sightings of bottlenose dolphins and fin whales. Sightings are on the rise year by year, offering a real spectacle for visitors who travel to the towns of Xàbia and Dénia especially to witness this superb natural spectacle.

Although Cabo de San Antonio is where most sightings take place, there are other areas of special interest where they can often be seen swimming. Visitors can also travel to Torrevieja, to the Serra Gelada nature reserve in Benidorm or to the marine reserves around the island of Tabarca and the Columbretes islands.

The bottlenose dolphin is one of the most common species of dolphin all over the world. They are famous for their great intelligence and for their curious and sociable nature, which frequently leads them to interact with humans. They can often be seen swimming through the wake produced by boats or in large groups of between 10 and 12 animals. They are amazingly beautiful animals, weighing around 100 to 300 kilos and capable of swimming at about 35 km/h.

Another of the cetaceans you can spot in the Region of Valencia is the fin whale. It's the second largest species of whale in the world, smaller only than the blue whale. They usually swim in deep water in groups of between six and ten individuals, each of which can grow up to 24 metres long and weigh more than 80 tonnes. Whale watching is generally done in the form of group boat trips but sometimes tourists are able to observe them from dry land.

Watching these amazing animals swimming in their natural environment and in complete freedom is a real spectacle. If you're keen to go whale and dolphin spotting, the best thing you can do is to travel during the migration season (in the spring and summer), when they swim from the Liguria coast to the Atlantic Ocean. The whale and dolphin observatory in Dénia offers the chance to watch these magnificent creatures swimming close to the Alicante coast, without having to go out to sea by boat.

If you plan to go to the Region of Valencia to watch dolphins and whales you can contact one of the many companies running boat trips out on the Mediterranean Sea. It's best to book your trip with a company that you're confident is committed to sustainable ecotourism and where they love and protect animal species.